Since it opened its doors in August 1909 there have only been eight Head Teachers at St Winefride’s starting with Miss Alice O’Callaghan who served for 24 years as our Head Teacher, followed by Mr James Loughran, Mr H. Clarke, Mr Brian Doherty, Mr Daniel Short, Mr Brian Lucey, Mr Paul Underwood and now Mrs Nicola Brosnan. This stability and endurance has helped to forge a special community at the school.

However St Winefride’s has seen some incredible changes since it opened its doors. World Wars, partial destruction, huge increases (and changes) in the local population, technological advances and more recently the COVID-19 pandemic.
At its heart the school has always sought to provide a sound Catholic education for its pupils and we are currently graded as ‘Outstanding’ by both Ofsted and the Diocese of Brentwood. 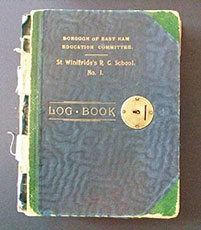 Like many Catholic Schools in the east of London opened at the start of the previous century, St Winefride’s owes a debt of thanks to the indomitable spirit and hard work of Canon Palmer who was instrumental in the school opening on 23rd August 1909, after anxious years of waiting and saving. The 250 pupils were taught in just 5 classes with ages ranging from 5 to 14 year olds.

Our logbook mentions that some classes housed more than 60 children with two separate lessons often being taught at once.
A glance through the school log book shows that visits from the school nurse, trips to the library, musical performances and well as visits by H.M.I Inspectors show that the more things change, the more they stay the same.

Up until 1984 the School Log Book was completed by the Head Teacher and was used to compile the following brief history:

With the outbreak of war in 1914, many of our children were suffering from lack of nourishment and unsuitable footwear. The Head Teacher wrote – ‘The attendance is very poor, several children are absent due to lack of food.’ Indeed some of the children had to queue outside the Cooperative stores at 6.45am to obtain sufficient rations. In the 1920s and 30s some normality crept back into the lives of the children and some even had ‘holidays’ working on farms in Essex helping to collect the crops.

Life changed again in 1939, with the advent of war. The children of St Winefride’s were evacuated to Ingham and Lessingham in Norfolk. However, by April 1940 most of the children had returned as the predicted bombing of London had not materialised. The school log outlines that 2 classrooms were occupied by the Auxiliary Fire Service, which kept a fire engine in the playground.

By 1941, the blitz over London was very heavy and the school log records – ‘On Sunday 11th May at 1am a large bomb (probably 500lb) fell at the boys’ entrance to the school. Room ‘IV’and room ‘V’ collapsed bringing with it part of room ‘X’.’
Luckily no child was injured during the raid and the school was only closed for one day! At the end of the war, the Head Teacher wrote – ‘We have much to thank God for as not one of our children has lost his life, though many have lost their homes. We have endured 5 years of bombs, fly-bombs, rockets and evacuations.’

At this time John Heenan became the parish priest for St Winefride’s. He was later made Cardinal of all England in 1965. Indeed our dining hall was named the Heenan Hall to celebrate his achievements and connection to St Winefride’s. 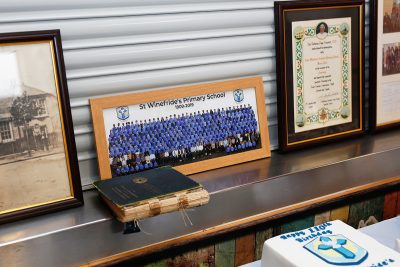 In 1959 the school celebrated its Golden anniversary and extended the premises by adding a second floor to the building.

By the 1960s Manor Park, like most of London, was experiencing a change in the makeup of its community. This benefitted St Winefride’s as it saw an influx of Catholic families and the school opened an annex in Lathom School in East Ham. At one point the school had over 650 pupils, but this slowly declined and the annexe was shut in 1983.

Miss Patricia O’Connell, a teacher at the school for over 34 years was interviewed about her time at the school and fondly remembered the ‘May Queen’ ceremony and the ‘Gilbert and Sullivan’ style musical productions. She also told of the children having to ‘brave the elements’ if they needed the toilets as they were on the other side of the playground and not in the main school building.

It wasn’t until the first floor extension was built that the route to the toilets had cover! One of the main events of the year was the Corpus Christi Procession which began at the school and went all the way to St Nicholas Church and required a police escort and the roads being closed.

There have been many prestigious events at St Winefride’s in the years since the Log Book was regularly completed, among the notable occasions are the school being chosen as the founding members of the Commonwealth Youth Choir. 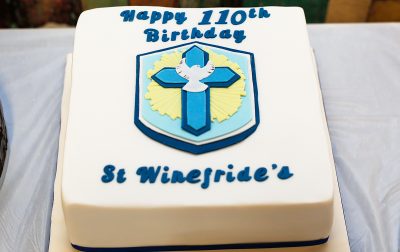 This led to the children in the school singing for Her Majesty the Queen at Buckingham Palace, for the Heads of the Commonwealth on numerous occasions and also recording a CD at the world famous Abbey Road Studios.

Children from the school also took part in the Queen’s Christmas message in 2017.

As you can see St Winefride’s has had an extraordinary history and we look forward to the future eagerly as we come out of the COVID pandemic.

This website uses cookies to improve your experience while you navigate through the website. Out of these, the cookies that are categorized as necessary are stored on your browser as they are essential for the working of basic functionalities of the website. We also use third-party cookies that help us analyze and understand how you use this website. These cookies will be stored in your browser only with your consent. You also have the option to opt-out of these cookies. But opting out of some of these cookies may affect your browsing experience.
Necessary Always Enabled
Necessary cookies are absolutely essential for the website to function properly. These cookies ensure basic functionalities and security features of the website, anonymously.
Functional
Functional cookies help to perform certain functionalities like sharing the content of the website on social media platforms, collect feedbacks, and other third-party features.
Performance
Performance cookies are used to understand and analyze the key performance indexes of the website which helps in delivering a better user experience for the visitors.
Analytics
Analytical cookies are used to understand how visitors interact with the website. These cookies help provide information on metrics the number of visitors, bounce rate, traffic source, etc.
Advertisement
Advertisement cookies are used to provide visitors with relevant ads and marketing campaigns. These cookies track visitors across websites and collect information to provide customized ads.
Others
Other uncategorized cookies are those that are being analyzed and have not been classified into a category as yet.
SAVE & ACCEPT
Powered by